Carl L. Moody was born and raised in Gary, Indiana. He was the only child born to Marolyn Brown, who was killed in a car crash when he was 13 years old. Only months after the death of his mother, a young and bitter Carl became a member of the Black Gangster Disciple Nation. His anger fueled his violence and he quickly became one of the most notorious gangsters in the Mid-west.
In 1991 Carl was found guilty of attempted murder and was sentenced to 2 1/2 years in Indiana Department of Corrections. It was there that he came in contact with ‘the’ Jesus his grandmother so frequently talked about. After his release in 1995, he joined True Light Fellowship Ministries and the call on his life was confirmed by the Pastor Scott S. Jefferson III. After serving under Pastor Jefferson for 7 years, Carl backslid and slowly gravitated back to a life of crime and violence.
In 2010, in an attempt to get his life back on track, Carl moved from Indiana to Texas. After being In Texas for only a year, he was charged with aggravated assault with a deadly weapon and sentenced to 3 years in the Texas Department of Criminal Justice System. 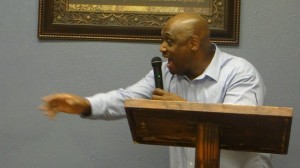 This was the best thing that ever happened to Carl Moody because during his incarceration, he not only re-dedicated his life to The Lord, but received the vision from the Lord to start a ministry dedicated to teaching the Word of God and reaching out to those whom the world had given up on. Carl believes that if men take their rightful places in the Lord, lives would be better for women and children.

Upon his release in June of 2013, Carl moved to Houston, Texas and joined New Jerusalem Church of God in Christ. It was there that he met and fell in love with the woman of his dreams, Fiona Marcia Robinson whom he married 6 months later.

Approximately one year later, Carl, his wife and his two sons Carl Moody Jr. and Charles Moody opened the doors to Light in the Lord Fellowship Ministries. Now together, they are diligently seeking the Lord Jesus Christ so that He may use them to serve the Body of Christ and help those that are lost to find direction and develop their God-given gifts. Their main focus is The Word of God!!!